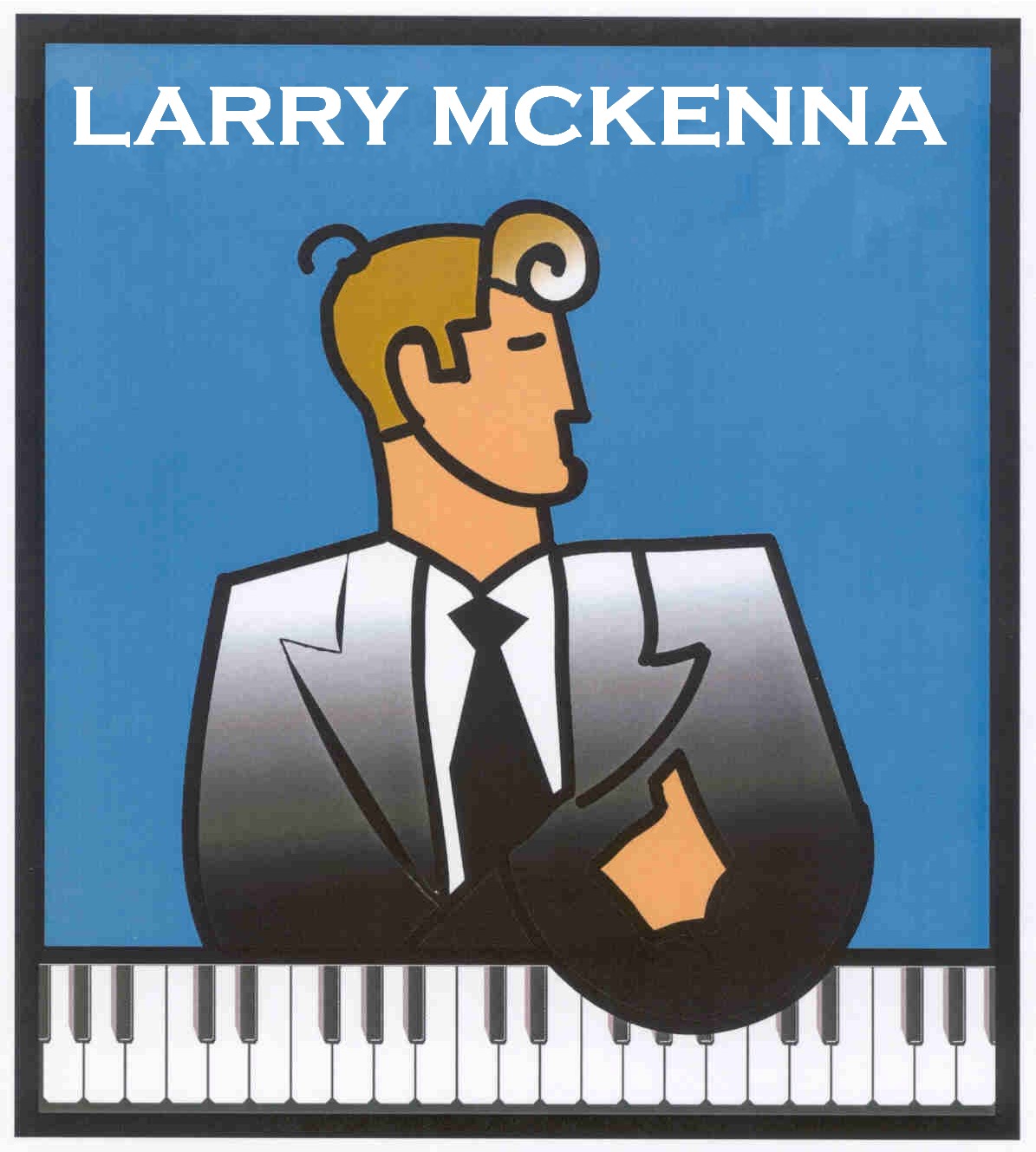 FROM THE AUTHOR OF BURT & ME 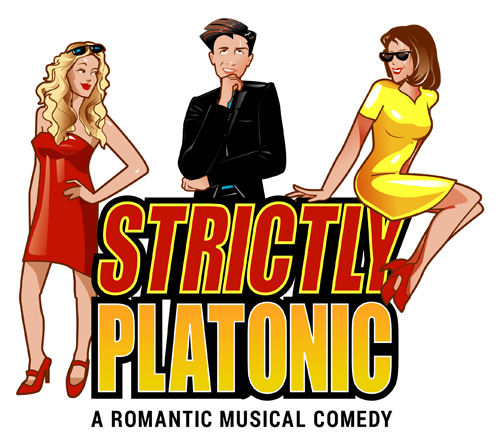 STRICTLY PLATONIC  IS A ROMANTIC MUSICAL COMEDY WITH BOOK & LYRICS BY LARRY MCKENNA AND MUSIC BY CHRIS DOUGHERTY.  THE PLAY VERSION OF THE SHOW PREMIERED AT HEDGEROW THEATRE IN MEDIA, PA IN 2013 TO GREAT SUCCESS.  JIM RUTTER OF THE PHILADEPHIA INQUIRER DESCRIBED THE SHOW AS "A DELIGHTFUL EVENING THAT'S SWEET TO ITS CENTER AND ULTIMATELY WORTH EVERY BITE."

WITH EXTRA TIME ON HIS HANDS DUE TO THE PANDEMIC, MCKENNA SET OUT TO TURN THIS WONDERFUL PLAY INTO A MUSICAL AND ON SEPTEMBER 10, 2021, GRETNA THEATRE STAGED A READING OF THE SHOW FOR OVER 200 PEOPLE.  COMMENTS FROM AUDIENCE MEMBERS CAN BE SEEN BELOW.  MCKENNA IS EXCITED FOR THE 2023 PREMIERE OF THE SHOW AT THE BEAUTIFUL TABERNACLE (700-SEAT VENUE IN MT. GRETNA, PA).  INTERESTED THEATERS CAN EMAIL US AT This email address is being protected from spambots. You need JavaScript enabled to view it. TO RECEIVE A PERUSAL COPY OF THE SCRIPT.  HERE IS A PROMOTIONAL VIDEO OF THE SHOW: www.youtube.com/watch?v=WJjl-iyibEE 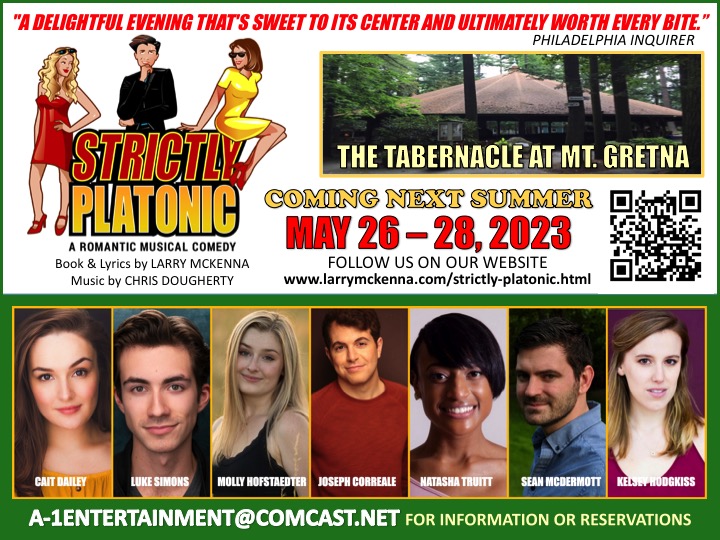 CAST OF HEDGEROW THEATRE PRODUCTION IN 2013 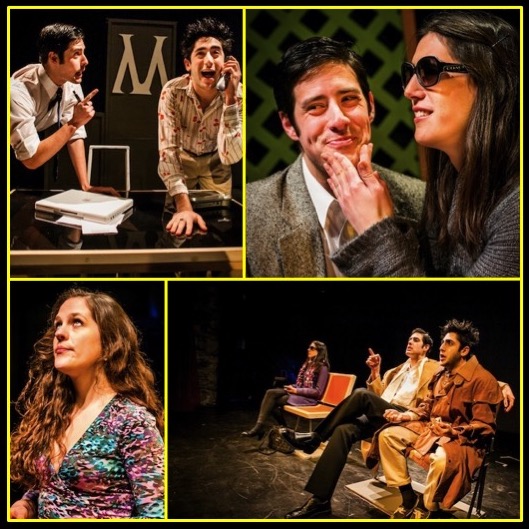 CLICK HERE TO SEE PROMOTIONAL VIDEO FROM THE PLAY VERSION OF THE SHOW AT HEDGEROW THEATRE. 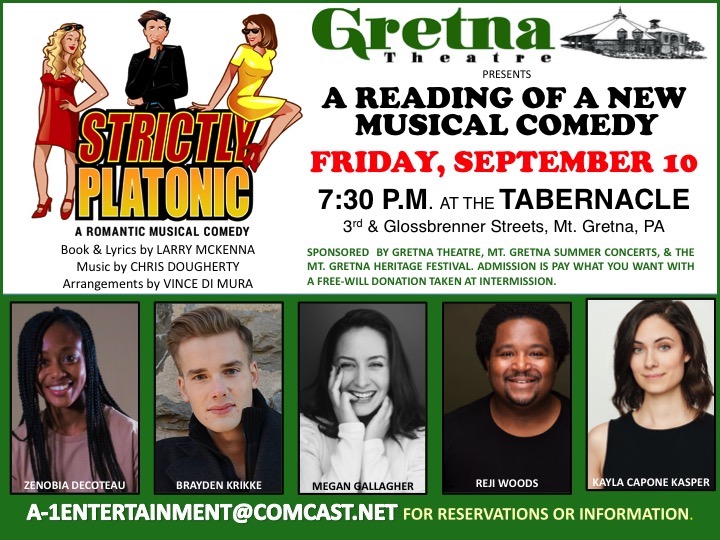 THE ACCOMPANIMENT FOR THIS READING WAS PIANO ONLY.

HOWEVER, THE SHOW IS SCORED FOR FIVE INSTRUMENTS: KEYBOARD, DRUMS, BASS, GUITAR, & TRUMPET. 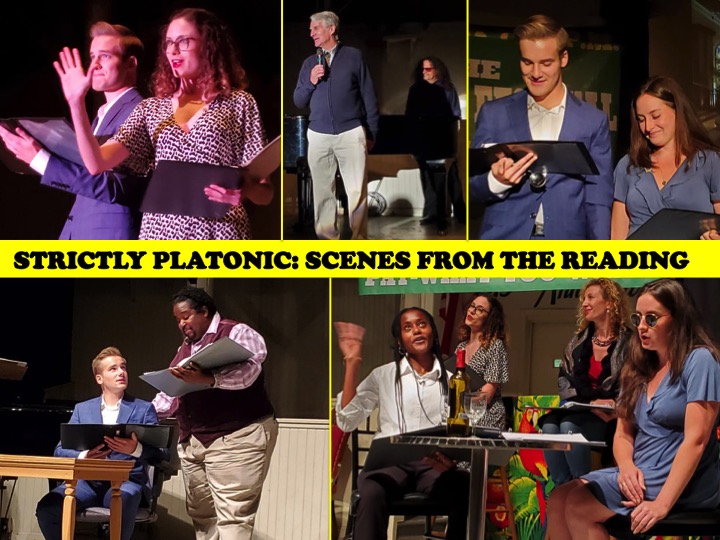 COMMENTS FROM AUDIENCE MEMBERS AT THE READING

MINA:  It was absolutely spectacular - every part of it ... the writing, the message, the performances, the singing ... wow, just wow! You knocked it out of the park yet again!

RON: What a great production!

MARY BETH: I had to write before going to bed.  We REALLY enjoyed the "reading" tonight. Great acting and to know they only had 2 days to get it together, is only amazing!    The two leads were wonderful, as was the co-worker and the server.  All good parts.   (I made notes of the "character names". . . . failed to save it!) This play struck a nerve with us. . . . .the girl being "blind" hit home, as our sister-in-law, about 68, went blind within 2 weeks, this time last year!  SO, this gave me incite as to what she deals with!   SOooo, this play had a lot of meaning to me, in odd ways, shed some tears. BUT, laughed a LOT!   VERY entertaining, good music, held one's interest.  Cute twist at the end with the date with the office girl.

DEAN:  My wife and I were fortunate to attend your original play tonight.  This was our first “reading” and admittedly we were both somewhat skeptical as to what to expect.  We are so glad we went and thoroughly enjoyed the script, the talent and the music.  The “plot” was delightful and unexpected so it was a wonderful surprise.  We also enjoyed the great quips, sauciness and lack of political correctness.  As we were leaving, we wondered how you could shorten such a fun story, as you said you may have to do.  Can’t say enough about the talent displayed tonight, especially on such short notice.  By the way, that includes the talent of the writer.  Great job, excellent work, and it enriched our day, week and month.  Thank you.

LORA:  Just wanted to let you know we thoroughly enjoyed the reading at Gretna on Friday evening!  We didn’t know what to expect. We arrived a little late due to dinner plans so we only caught you at the very end of your intro.  The play was very entertaining, contemporary and all of the actors are so talented! It’s amazing that they only received their scripts that week. The music was catchy too!   Keep up the great work, we do hope your play goes into full production!

PEG:  WE loved the show!

JOE: I’ve heard nothing but great reviews. How long now before it becomes a show?

HOWARD:  “Had a great time at the reading last night and congrats on that accomplishment!!  Having a talented cast really elevated the material and took the songs and dialogue to another level!

LOUISE:  Your play was great!  The jokes were funny, the music was good, good story with a twist.  Maybe a little long, but I really liked it.  Congrats!  I hope you can produce it somewhere.

CHRIS:  It was a great event!   Here are a couple of comments about the show: * I think you can shorten a few of the songs, particularly "Who Knew," since it is in there twice.  The second time, would it be better if you swapped around the spoken part with the reprise?  That way, you can get to the part where they are thinking "Maybe" faster, which could make the singing part a lot shorter.
* Really like the scenes that had interplay between Tim and Josh and the ones with the interplay with Tim and Annie.  They were funny and moved quickly.
* Not sure if the scene with Tim and Vicki at the museum has to use the exact same examples of boorishness with Vicki's ex as with Tim.  Maybe the first one can be exact and the second one could be similar but equally boorish.  Then Tim could say something like "I wish I had said that."  Having all four examples exactly the same stretches credulity a little bit.

CAROL:  I want to let you know how much Mick and I enjoyed the reading of your play Friday night. We thought it was funny, well written, and the music was very good. The first act was a bit long. If it hadn’t been chilly and if the seats were softer, I might not have noticed the length. I hope to see it again when it is in its final form!

CHRISTINE:  Thanks again for a great evening.

MARIA: Fabulous!   It was sweet, romantic, funny, enjoyable.   My husband and I have started holding hands again because of the script. Ya gotta see it to believe it!

CAROLE:  Awesome!!   Looking forward to seeing it in the theatre.

Tim is the romantic lead.  He is an extremely handsome man who women are immediately drawn to.  In addition to being a "babe magnet," he is an extremely nice person, which only adds to his attraction.  Up to this point in his life he as been a serial dater who has finally come to the realization that he wants to finally settle down.  He is on a mission to find the perfect woman.

Annie is one of Tim's romantic interests.  She is attractive, extremely confident, and funny.  She is sassy and refuses to back down when confronted.  As we learn early in the story, she is also blind.

Josh is the comedic lead and Tim's best friend.  He works with Tim at Mendenhall Realty.  He is jealous of Tim's success with the women and has never had any luck with women.  This part requires great comedic timing and likeability.

Vicki is the other main romantic interest in Tim's life. She also works with Tim at Mendenhall Realty.  She is extremely attractive, smart, and nice.  Both Tim and Josh consider Vicki to be their definition of "perfection."

Mya is a waitress at the Lucky Parrot Cafe.  She can be any age.  She must be likeable and fun.  She befriends Annie and becomes a confidant to her.  She must be able to demonstrate an edge to her personality.

Shaun is an extremely likeable young man who befriends Annie during her low moments.

Marsha is a versatile character who play several roles and is part of the ensemble. 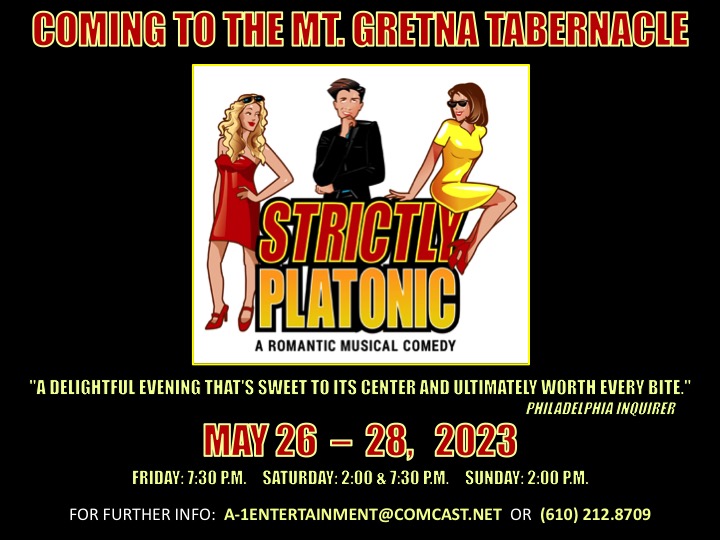 FOR INQUIRIES: This email address is being protected from spambots. You need JavaScript enabled to view it. 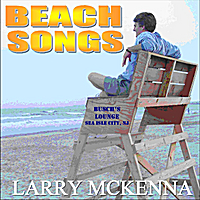 Cabaret at the Timbers